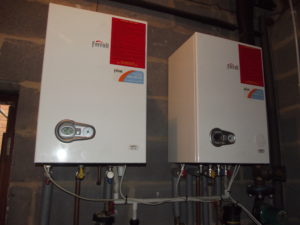 The Ferroli Modena HE domestic combi boiler has proved itself to be the ‘David’ of the boiler arena by beating a commercial ‘Goliath’ to win the job.

A social club in Stockton-on-Tees that was without heating for three years because of the unaffordable cost of a new commercial boiler has piping hot radiators again following the installation of two Ferroli Modena HE domestic combi boilers at half the cost.

The patrons of Oxbridge Social Club had been loyally braving the chill of the unheated venue after the old commercial boiler was condemned and the club was unable to afford the £20,000+ their gas engineer had quoted them for a similar replacement.

But when Mark Ellis of E-Fix Property Services from Stockton-on-Tees heard about their problem after a chance meeting with the club’s engineer in the Stockton branch of James Hargreaves, he knew from his experience of the Modena HE boiler that it could be the very affordable answer to their problem.

Not one to be discouraged by his sceptical colleague, who was adamant that only a bigger commercial boiler could do the job, Mark proposed using two Modena boilers, a 38kW and a 32kW model. With the total cost coming in at less than half than the commercial boiler and with the Modena’s seven year parts and labour warranty – unheard of on a commercial boiler – there was no contest and Mark was instructed to go ahead with the installation.

After the boilers were installed the existing 22mm pipework was upgraded to 54mm to improve circulation. Within no time at all, even running off just one of the new boilers, the radiators throughout the club were blazing hot – all for a fraction of the cost that the club had been expecting to pay and with the valuable back-up of the seven year warranty.

“The performance of the Modena is incredible,” said Mark. “I knew that it would be able to cope with the demands of this installation and that a big over-priced, over-engineered commercial boiler just wasn’t necessary. For the footprint of this building, it’s very impressive that a domestic boiler the size of the Modena can deliver more than enough heat and hot water. 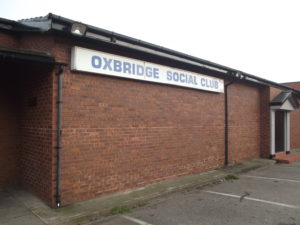 “The Modena is the only boiler I will install now for my customers. In fact, I have so much faith in this boiler that I give my customers my own personal guarantee in addition to Ferroli’s own warranty. I don’t advertise, all my business is continuous and by word of mouth, so I only recommend products that I know are 100% reliable.

“The Modena is so easy to work on and it’s extremely energy efficient. It’s also so small and light you can lift it without risking injury and install it practically anywhere, such as an airing cupboard or a loft.

“When I first heard about the Modena I thought I’d give it a try as I would never discount something without making my own decision. I knew that Ferroli had suffered in the past from the ‘Skoda effect’, but times change and you need to keep yourself up to date; after all, the police and the ambulance service drive Skodas now which speaks for itself!”

“The improvement made by Ferroli with the Modena boiler is amazing – you get so much for your money. To start with there were a couple of issues with the filling loop and the colours on the taps but Ferroli listened to installers’ feedback made the changes we asked for.