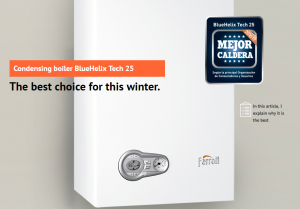 The European version of the Ferroli Modena HE boiler has been awarded Best Boiler on the market by a Spanish consumer magazine survey.

The BlueHelix Tech 25C, which is the same design and construction as the Ferroli’s UK model the Modena HE, came out top in a survey of eight major boiler brands published in October 2016 by Spanish consumer magazine Compra Maestra. Also achieving the same score was the Cointra Superlative Condens 25C boiler.

The aspects take into account in the analysis of the boilers were annual cost, power, performance, operation in summer and winter, hot water production, CO and NOx emissions and fuel consumption.

The survey concluded that the BlueHelix delivers excellent performance in both heating and hot water modes, especially in winter, and that it is highly energy efficient and economical on fuel.